Is Trading Your Time For Money The Best Career Choice?

Imagine living in 10,000 BC. You are a 30 something male settled near a large body of rainwater with your family. You wake up every day, take out your stone hunting tools and head out to the jungle along with a few other settlers to hunt for your family. You spend your whole day looking for a herd of deer or bison and capture and kill a few. When the evening dark hits the sky, you divide the hunt among your comrades and head home with the food.

That was your day job.

Then someone invents farming and organized food production, and people start working on large farms and start getting paid in the form of grains. Multiple people working on something that they alone could not have done and got a share in the final production – that was a rough start of what we know as a “career” now.

Industrialization accelerated the idea of “career” further. People started working in non-farm related jobs. Business areas diversified to include people in different caders. Now you go to your office/factory, work inside a setup, do your assigned job in overall production, and get paid in the form of money which you can trade for food & other necessities.

In a typical capitalist setup, there are numerous career choices depending upon your level of skills and education. Though on the surface, they might seem different but essentially, everyone is trading their time for money and use their skillsets as leverage.

Let me explain this further.

An engineer, a doctor & a teacher has different skill sets. They are trained to perform specific tasks inside a big wheel of production, but what is common among them is that all three of them are selling a certain number of hours from their day to get paid.

Their level of expertise i-e skillset serves as leverage. The more experienced you are, the higher you get paid per hour.

The traditional career model works perfectly well, but there are fundamental limitations to the system that you only notice when you are ambitious enough. If you want to earn a lot of money and become super-rich, you start seeing these inherent limitations, and you realize that it might not be the best way for you to get there.

Since you are trading your time for money, you start noticing that to earn more, you have to either (i) put in more hours or (ii) learn higher skillsets that you can leverage.

There are limitations to both.

You only have 24 hours in a given day that you can ‘sell.’ In an ideal world, where you don’t need a break for lunch and a good night’s sleep, you can sell all of your hours and get paid a certain amount.

You cannot sell more than 24 hours in a day and more than 8760 hours in a year. That’s an ideal world we are talking about, but you don’t live in an ideal world. In the real world, you need 5-8 hours of night sleep. You also need time to work out, eat, and spend with your family. That leaves you with only a handful of hours to ‘sell.’ That’s your first inherent limitation.

Ok, so if you cannot sell more hours, maybe you can sell the few available hours more expensively. That can work, but it requires you to master new and higher skillsets. Learning new skills also requires time (along with money & energy), so you can only master a limited set of skills over your lifetime. That’s why some of us are engineers, and others are doctors, but not both. That’s the second limitation.

Apart from these inherent limitations, the TCM also has a single point of failure. You work for a single company/boss that can fire you without any consideration. You are just a small cog in a big wheel, and your nonunique skills make you highly replaceable. So basically, you are hanging by a thread in your quest to become super-rich (or make a decent living for that matter). When the economy goes down, you get fired. When your skillsets cannot keep up with the industry demands, you get fired. When your boss doesn’t like you, you get fired.

If you are an ambitious but a rational person, you would agree that the odds of getting super-rich are not in your favor. Yes, you can make a normal day to day living with a few hiccups along the way throughout your career, but that’s it. 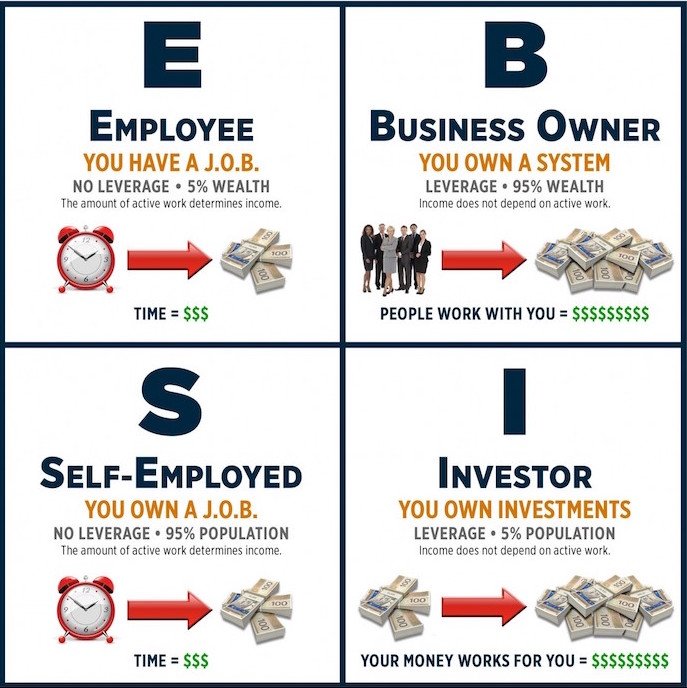 The idea is quite simple but very far-reaching and not very well understood. There are basically four ways individuals create wealth in an economic setup. At each step of your career, you would find yourself in one or more of these four quadrants.

E-Quadrant: This is where most of you with traditional careers live. You have a job and work for an individual or an organization. Your skills contribute to the overall production of the company, and you get paid accordingly. Your time is your money.

S-Quadrant: Instead of having a job, you own the job. You work for yourself. A shopkeeper, a freelance web developer, a doctor who has his own practice all are in the S quadrant. Again like the E-quadrant, your time is your money, but as long as you own your job, you won’t get fired. You are slightly more likely to make it to the riches compared to the people in E-quadrant as long as your work provides value to society.

B-Quadrant: This is where the wealth magic starts. You own a system that produces value (and wealth as a result). You don’t have to actively sell your hours to create more wealth. You buy someone else’s hours & skills, sell them for a higher price, and pocket the profit. You do this at scale and have higher chances of making it to the rich land than the first two quadrants.

I-Quadrant: This is your ultimate destination in your quest to become rich. Instead of owning one or two businesses, you own chunks of many businesses in the form of stocks or shares. You do not work on your day to day basis, so your income finally decouples from your time. Your money works for you and produces more money, which further works for you. This compounding of wealth is your ticket to the riches.

Once you understand the four quadrants of wealth creation, where you currently fit, and where you want to be, the rest is just planning, action, and execution. With proper planning, hard work, passion, and a touch of luck, you can be there sooner or later.

While a decade and a half ago, the traditional career model (i-e E quadrant) was your only choice after graduating from college if you didn’t have a generational wealth or connections.

The advent of the Internet and improved global trade connectivity changed everything.

Now, you can start a business with minimal investment and sell your service or product to customers and clients worldwide just from your phone or laptop. You don’t need a business degree, years of experience or tons of cash to make it to the S or B quadrant. And once you are in one of those quadrants and accumulate some wealth, you can easily enter the I-quadrant. That’s your final destination where you ultimately want to be.

In the brave new world, you have multiple leverages that were not available to aspiring entrepreneurs and businessmen before the age of the Internet.

Global connectivity: This is probably the biggest leverage of the modern, post-internet world. You can reach millions of people worldwide and sell to them with a few clicks on your laptop. Before that, your only customers were people living in your locality or at most in your city or country. Trade localization in the absence of a cheap global network was a big hurdle for people who wished to start their own businesses. Now, this has changed, and you can use your cheap 4G connection as leverage to 10x or 100x or even 1000x your business revenue while keeping the overheads and other costs at a minimum.

Access to cheap labor: Global connectivity has also provided access to affordable and skilled labor in other parts of the world. Now you can design your product, get it manufactured from China, ship it to the USA and sell it worldwide from there. You don’t need to hire expensive labor in your city to do the same job.

Global logistics: As we discussed above, before the advent of the Internet, it was costly to reach customers overseas and almost impossible for individuals or small companies to sell to them. The Internet solved that problem, and when the reach become cheaper and affordable, the logistics industry also advanced to meet the demand for global trade. Now you can ship your product from one part of the world to the other within days and not weeks or months. For reference, the average delivery time for DHL worldwide is 3 – 4 days.

Once you plan to move up the cash quadrants and leverage the improved global connectivity, the world is your playground. You can pick up any business model around any product, outsource the manufacturing and logistics, and use the Internet to sell it worldwide. When you do this correctly, you are already in the 3rd quadrant – you now own a business.

The sun is setting on traditional careers

With the rise of the gig economy and increasing automation in almost every field, the sun will soon be setting on traditional careers. Companies are increasingly outsourcing jobs to freelance workers and smaller agencies, effectively shrinking their workforce. I have explained the underlying concept HERE

In the new economic setup, people with specialized skills will outweigh people with more general skills. Generalists will become highly replaceable with automation & AI while specialists will take over the chunks of work that still needs a human touch. I wrote a short piece about the role of automation and the consequence it will have on jobs HERE

In such a setup, it will be highly desirable to control the overall value production instead of clinging to a smaller position in a large system. To sum it up, own your job, or better own a value production system that you can leverage to get rich and safeguard yourself in the rapidly changing economic setup.

What is your concept of a perfect career? Let me know in the comments below.